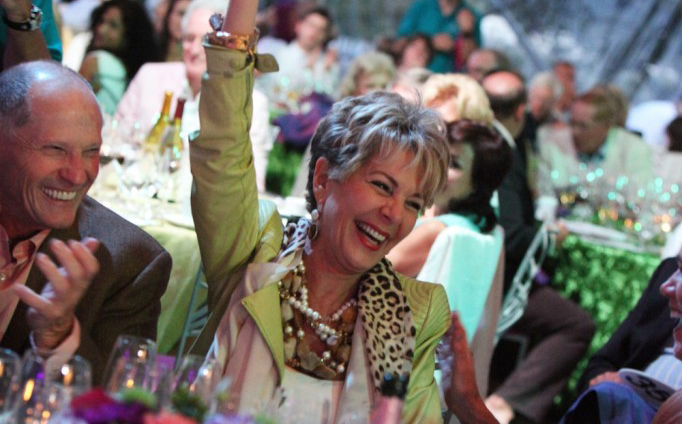 Since it was created in 1993 by ESPN and the late Jim Valvano, legendary North Carolina State basketball coach, The V Foundation has awarded more than $100 million in grants. Because the foundation has an endowment to cover its administrative expenses, 100 percent of the funds raised at the event will go to cancer research and programs.

A major theme of this year’s V Wine Celebration was The V Foundation’s “street cred,” as event host, legendary Duke University men’s basketball coach Mike “Coach K” Krzyzewski, described it. V Foundation Chairman Robert Lloyd told the crowd, “No charity, no nonprofit will be better stewards of your money than The V Foundation.” Over the years, the organization has been able to leverage its grants into $1 billion for cancer research.

Christophe Georges, president and COO of Bentley Motors Americas, said Bentley is proud to be a partner with The V Foundation. It is the only organization in the Americas that Bentley supports on a continuous basis because of its commitment, transparency, heart and dedication. “This is why you can continue to count on us,” he said. This is the third year Bentley has sponsored The V Wine Celebration.

On Friday, guests started their day with a Bentley driving experience through the Napa Valley followed by a Riedel wine tasting in the afternoon. Members of the Giving Club attended the Presidents Club & Vintner Grant Honoree Luncheon sponsored by Bentley Motors at the Napa Valley Reserve. The 2013 Vintner Grant honorees were introduced and recognized: Fred and Mary Constant, Jeff and Valerie Gargiulo, Dick and Ann Grace, Fred and Sally Schweiger and Lowell and Janet Herrero. The V Foundation will provide a grant to prostate cancer research this year in each of their names.

Friday evening’s popular “Let’s Get it Started” party at The Pavilion at The Vintage Estates in Yountville featured Napa Valley’s renowned restaurateurs, preeminent vintners and custom barrel auctions, where guests had the opportunity to bid on one-of-a-kind cases of custom-created wine blends from celebrated winemakers. The evening ended with guests dancing to David Martin’s House Party.

Saturday morning the Foundation presented a public Cancer Research Symposium, where prominent physicians and research scientists from around the nation gathered to present the most current advances and discoveries in clinical applications, new diagnostics and alternative treatments for cancer. The standing-room-only crowd of several hundred then had the rare opportunity of posing questions to these leading researchers during a lively Q&A session.

The weekend’s activities culminated with a gala dinner and live auction at Nickel & Nickel Winery, which has served as home of The V Wine Celebration since 2005. Beth Nickel, owner of Nickel & Nickel, was honored by V Foundation CEO Susan Braun, who recognized her “magnanimous spirit that has blessed us all these many years” and presented Nickels with a painting by Lowell Herrero of her own summer cottage in the north woods of Wisconsin. Surprised to be honored, Nickels thanked everyone, reiterated her commitment to The V Foundation, and said, “Let’s raise money and wipe out this hideous disease.”

In 2003, Nickels lost her husband Gil Nickel to an aggressive form of melanoma. Just three months before his death, despite being gravely ill, Gil Nickel made his final public appearance at The V Wine Celebration, where he thanked everyone for what they were doing for cancer research. That same year, Beth Nickel joined with The V Foundation to run a successful campaign to endow the $1 million Gil Nickel Fund, which was awarded to The UCLA Jonsson Cancer Center in support of melanoma research.

V Foundation Wine Celebration co-founder and board member Julie Allegro honored fellow V Foundation board member Steven Bornstein, president and CEO of the NFL Network and former president and CEO of ESPN. “It’s a perfect night to recognize what we call the man with the idea,” said Allegro. “ESPN has a force; it’s called the Jimmy V Committee. Employees are so dedicated, and all of that stems back to Steve and his commitment.”

Bornstein lost his brother, mother and father to cancer over a 14-month period 20 years ago. During that time, he read an article in Sports Illustrated about Jim Valvano, his friend and colleague, and Jim’s own battle with cancer. Bornstein suggested to Valvano that they start a charity to fight cancer. “Jimmy said we’re not going to fight cancer, we’re going to cure cancer,” said Bornstein. “He insisted that we fund research.” Bornstein was presented with a tribute book and the announcement of a translational grant in his brother, mother and father’s names. “If Jim Valvano were here tonight, he would say, thank you, my friend for giving me that comfort, that magnificent gift of knowing my life would matter,” said Allegro in recognizing Bornstein.

“The V Foundation Wine Celebration is an extraordinary, classy, entertaining way to gather amazing people and raise money for cancer research,” said Susan Braun, CEO of The V Foundation. “After 15 years, the shine is brighter than ever. Each vintner, each sponsor, each participant – all come together to make a difference, and this year was a resounding success. Our deepest gratitude to everyone who made this possible.” V Foundation Chairman Robert Lloyd and event host, Coach K loosened up the crowd, imploring the guests to give generously for this important cause — and they did.

Coach K poked fun at friends in the audience and told a humorous story about meeting rapper Jay Z and his admitted love of Jay Z’s wife Beyoncé, before getting serious. “Tonight isn’t about being motivated, it’s about being inspired,” he said. “We create inspirational videos for our Olympic team,” and he shared a video that “reinforces the words I would like to reinforce as we move forward.” Those words were “emotion, pride, together, compete, enthusiasm, talk, passion, fight, energy, dirty work, communication and no excuses.” He invited the audience to recommit themselves to the fight against cancer. “We want you to renew your commitment to be emotional, to get angry, to work together,” he said. “Let’s look cancer in the eye and spit in its face.”

The most compelling auction lot was this year’s fund-a-need, which honored TV anchor Robin Roberts. In 2007, Roberts’ professional and personal worlds collided as she chose to turn the cameras on herself when she was diagnosed with breast cancer. She eventually was declared cancer free, but then in 2012 she was diagnosed with a rare blood disorder, MDS (myelodysplastic syndrome), She took a leave from her co-anchor position on Good Morning America to receive a bone marrow transplant from her sister, Sally Ann Roberts. After a successful operation, she returned to work in February 2013. Roberts, who received the Arthur Ashe Courage Award at the ESPYS last month, has served as an inspiration to countless people as she has twice overcome life-threatening illnesses, while America watched.

V Foundation Chairman Robert Lloyd introduced Robin Roberts, who attended the event remotely, addressing the guests by video. “I remember last year and it was just weeks before I was going to have my transplant. I felt the love. It boosted my spirit,” she thanked the audience, and reminded everyone, “We need more money for research. As my momma used to say: ‘Good Lord willing and the creek don’t rise,’ I will be there with you next year.” Bidders honored Roberts by uniting to donate nearly $1.2 million to MDS research. More than 130 guests donated to the fund-a-need, with Michael and Carole Marks and Larry and Nancy Probst kicking it off with generous pledges.

The evening culminated with a performance by Oscar and Grammy Award winning singer and guitarist Melissa Etheridge, nine years cancer free. She dedicated the song Run for Life to Roberts. The song has special significance, as it is about cancer and running for answers to make the situation better. “I love you,” she said. “Keep running, my friend.”

With the winning ticket in the “Choose Your Porsche” raffle, Cyril and Blakesley Chappellet will choose either a 2013 Porsche 911 Carrera, 2013 Porsche Cayenne GTS or a 2013 Porsche Panamera valued at up to $100,000 to take home.

Auctioneer David Reynolds kept the bidding lively through all 36 lots, including travel experiences in the Bahamas, New Orleans, Miami and Anguilla, and a never-before-offered vertical featuring 30 vintages of Grace Family Vineyards Cabernet Sauvignon. Befitting the foundation’s origins, sports enthusiasts found a variety of enticing lots, among them the opportunity to attend the Duke Blue Devils vs. the University of North Carolina Tar Heels, the ESPYS, the Dick Vitale Gala, Super Bowl XLVIII and the 2013 Winter Olympics in Sochi, Russia.

Generosity paid off for top bidders Evan and Cindy Goldberg. In addition to their generous pledge and their support to the fund-a-need, they walked away with four auction lots. In addition to their generous $50,000 pledge to the fund-a-need, Gus and Linda Doppes won lot #10, introduced by special guest Olympic snowboarder Louie Vito, and are headed to the Winter Olympics in Sochi, Russia, as well as on an adventure in Wisconsin with Beth Nickel and Holly Peterson. In addition to raising their paddle for the fund-a-need, John and Sandra Thompson will also be going on the set of Good Morning America with Robin Roberts. Olympic figure skater and cooking show host Brian Boitano introduced his lot; Jim and Gretchen Mair will enjoy a meal at Boitano’s home in San Francisco. Doug and Jill Schatz took home the rare 30-vintage Grace Family vertical.

ABOUT THE V FOUNDATION FOR CANCER RESEARCH The V Foundation for Cancer Research was founded in 1993 by ESPN and the late Jim Valvano, legendary North Carolina State basketball coach and ESPN commentator. Since 1993, the Foundation has awarded more than $100 million to fund cancer research grants nationwide. The V Foundation awards 100 percent of direct cash donations to cancer research and related programs. Thanks to its generous donors, the Foundation has an endowment that covers its administrative expenses. The V Foundation, which has received nine top four-star ratings from Charity Navigator, awards its research grants through a competitive awards process strictly supervised by a scientific advisory board.

For more information on The V Foundation or to make a donation, please visit www.jimmyv.org or www.winecelebration.org. # # # PHOTOS AVAILABLE