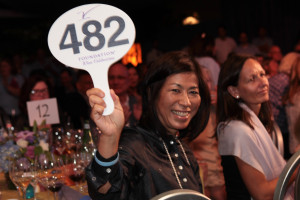 NAPA VALLEY, CA, AUGUST 10, 2015 – The V Foundation for Cancer Research’s annual fundraiser, The V Wine Celebration, garnered more than $10.6 million over the weekend of August 6-9 for cancer research. With an unprecedented $3 million matching grant from an anonymous donor, the total included more than $7.8 million in “fund-a-need” donations to support pediatric brain cancer research. “There are moments in your life where you feel like everything you have done up until then leads to this one single moment,” said Julie Allegro, founder and co-chair of The V Wine Celebration. “Tonight was one of those nights. The feeling in that room – the excitement, the tears, the energy – we were all one, for a brief moment. And together, we exceeded our wildest goals and raised over $10 million, and will make a dent in finding a cure to cancer.”
This year’s V Wine Celebration gala dinner at Nickel & Nickel winery welcomed back Mike “Coach K” Krzyzewski to rouse the crowd in the same way he has inspired and motivated players during his basketball coaching career. He suggested renaming The V Wine Celebration “The Winning Foundation” “because that’s what The V Foundation has done. It’s found cures. Jimmy (Valvano) was all about winning. That’s why this foundation was formed. Instead of being in his hospital room and saying, ‘I’m going to die,’ he said, ‘I’m going to win.’ “
“Everybody in this room is part of the team tonight,” he added. “Everybody will do something to help.” ABOUT THE V WINE CELEBRATION
The V Wine Celebration is a world-class wine event and auction benefiting The V Foundation for Cancer Research. Set in Napa Valley, the heart of California Wine Country, this annual event brings together 500 prominent members of the sports broadcasting, entertainment, media, lifestyle, technology, investment, medical and winemaking worlds to raise money to fund vital research in the fight against all types of cancer. To date, the V Wine Celebration has helped fund 550 research programs at medical and research facilities across the country. Dedicated to giving back to the generous Napa Valley and surrounding communities that have so enthusiastically embraced it, the foundation has included many Bay Area institutions among its grantees, including St. Helena Hospital, Queen of the Valley Medical Center in Napa, Stanford University and UC San Francisco. Co-founded by Julie Allegro and Robert Lloyd, The V Wine Celebration has grown to be to one of the top-rated charitable auctions in the country.