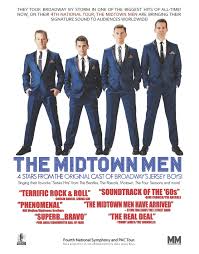 As original cast members of Broadway’s Jersey Boys, they took the world by storm in one of the biggest hits of all-time. Now they are together again becoming rock stars in their own right as THE MIDTOWN MEN. Tony Award winner Christian Hoff, Michael Longoria, Daniel Reichard and Tony Award nominee J. Robert Spencer are taking their sensational sound on the road once more, bringing to life their favorite “Sixties Hits” from The Beatles, The Beach Boys, Motown, The Four Seasons and more. Formed in 2007, THE MIDTOWN MEN reunites four stars from the Original Cast of Broadway’s Jersey Boys. Following their storied run on Broadway – where these four magnetic artists shared the stage for over a thousand performances and appeared on The Today Show, The Late Show with David Letterman, Dick Clark’s Rockin’ New Year’s Eve and The U.S. Open – they have been selling out venues coast to coast living the dream they once portrayed on the stage. THE MIDTOWN MEN is the next chapter for these accomplished entertainers, making them the first vocal group ever formed by the principal cast of a high-profile Broadway show.